Yankee Equipment Systems’ Eric Meyers was awarded the “Bulldog” award for persistence and success in sales.

In 1965, Landuwasco BV from the Netherlands became a Milnor dealer. Alex van Nieuwenhuysen and Walter ten Hagen accepted the 50th Anniversary award from Jim Pellerin at the banquet. 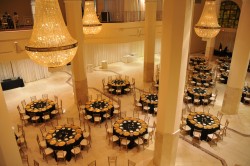