With the conclusion of the 2019 Clean Show in New Orleans, LA, Pellerin Milnor Corporation’s Vice President of Sales and Marketing, Rick Kelly, said he was pleased with the traffic in the Milnor booth. “Our new sling system – MilRail – was positively received by customers at the show, along with the introduction of our new lines of barrier washers and soft-mount cabinet washers.”

This year’s Clean show highlighted the introduction of the MilRail™ sling system. “As we continue to grow our footprint in the commercial and industrial laundry market space, a natural progression for us was to develop our own rail system,” explains Kelly.

In keeping with the idea of expanding our product offerings, Milnor introduced the MTF-Series and MWF125 to grow our soft-mount line. The introduction of the MWB-Series barrier washers provided additional solutions for the healthcare and clean room markets.

During the Clean Show, Milnor hosted a banquet and awards ceremony for its dealer network to celebrate the previous years’ sales efforts. The following top sales awards were presented to Milnor dealers on Friday, June 21 by Pellerin Milnor President and CEO James W. Pellerin.

Carl Rees was also presented with the “Lifetime Key Man Award” for receiving the Key Man award eleven times as of 2019 – the most any Milnor dealer has been named a Key Man. Carl also recently announced his retirement from Loomis Brothers after 39 years with the company.

TLC Tri-State Laundry Companies’ Bob Halpin was awarded with the “Against All Odds” plaque for his persistence and success in sales.

Florian Ott of Milnor Deutschland Vertriebspartner GmbH in Germany was presented with the “Innovator” Award for his creativity and dedication in his marketing and sales efforts.

Milnor also named Brian McCann with Equipment International the “Rookie of the Year.”

Clean ‘19 marked the 25th anniversary as a full line Milnor dealer for Appliance Traders and Oy Vestek A.B. and the 50th anniversary for Servicios Tecnicos SA. 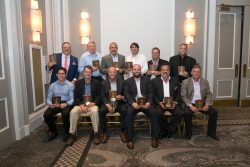