With over 150 PBW™ tunnel installations throughout the world, the industry has taken note of this revolutionary tunnel washing concept. New construction and replacement laundries alike—in every market—have testified to the inherent benefits in PulseFlow® Technology. Goodwill Industries in Miami, Florida knew that they needed to do their homework when designing their new healthcare laundry.

Goodwill Miami’s CEO Dennis Pastrana, Senior Vice President Peter Roberts, and Vice President Harry Ramsarran reached out to Milnor’s authorized dealer Steiner-Atlantic Corporation with an RFP to “build one of the most state-of-the-art healthcare laundries in the United States.”

After weighing the options, Goodwill Industries chose Milnor’s PulseFlow Technology over the other equipment manufacturers who bid on the project.

Goodwill President and CEO Dennis Pastrana called Goodwill’s entry into the healthcare laundry business “a bold decision” that took eight years to materialize, and is expected to reinforce the diversified entrepreneurial activities that generate the revenues that support the human-services mission of the Miami-based nonprofit.

Laundry Manager David Graumlich said, “Ralph was the key point person on the project from the very beginning and on site every day.” Tuccillo’s input was also instrumental in the laundry’s layout and choosing a shuttleless laundry design.

The plant is energy efficient, thanks to the two 68 kg (150 lb.) capacity 76039 8-module Milnor PulseFlow® tunnels that process up to 2,100 kg (4,700 lbs.) hourly. These True Top Transfer tunnels (with interrupted counterflow) average fresh water consumption is only 3.49 L/kg (0.42 gallons/lb.). The PBW™ washers that will help the laundry save over 5.6 million liters (15 million gallons) fresh water.

Goodwill employs a pair of Milnor MP1656 50-68 kg (110-150 lb.) capacity 56 bar single stage presses to extract moisture from the processed goods. These presses are efficient and reduce maintenance thanks to the optional door-mounted exhaust fan (eliminates chemical vapor exhaust) and the standard ratcheting ram device that rotates the ram 10 degrees after each pressure (prevents wear on the diaphragm). Another benefit of the presses is their wider basket produces smaller (thinner) cakes, which means less moisture retention and shorter dry times.

Goodwill’s ten 6458 pass-through dryers are energy efficient thanks the dryer pod configuration that eliminates bottle-necking and increases productivity. The dryer pod design eliminates the need for shuttles in the laundry, promoting safety in the workplace. Plant Manager Graumlich described the dryer pod design as, “[going] hand in hand with Goodwill's concept of uninterrupted service to the hospitals. One less major component and production pinch point to fail and we all have been there.”

The laundry features many safeguards – such as backup generators – to ensure a smooth operation under adverse conditions, even during and after hurricanes.
CEO Pastrana is particularly proud of the laundry’s proximity to Liberty City, where he said the facility will have the added effect of creating 200-plus jobs once it reaches its full 40 million pound of laundry operating capacity to help a community whose unemployment rate is triple that of the entire Miami-Dade County.
As a business enterprise with a social mission, Goodwill uses the revenues generated by its four entrepreneurial divisions to significantly support its combination of rehabilitation-driven work programs and creation of employment opportunities. Its four entrepreneurial divisions are: Donated goods, apparel/flag manufacturing, commercial services, and service contracts. The new industrial laundry will be part of the service contracts division.

The entire Goodwill Industries Miami team is thrilled with the project. They are confident that with the help of Milnor and Steiner-Atlantic Corporation, two companies that have been in business for generations (since 1947 and 1959 respectively); they will be able to provide the best for their customers throughout Southern Florida. Graumlich said, “It was important for Goodwill to partner with a company with a long sustainable history so we can provide the best service for our healthcare partners and our associates who we want to help and employ.” 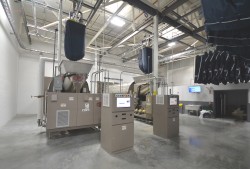