Since 2009, Milnor's PulseFlow® Technology has been winning over satisfied customers who are impressed with the unprecedented water and utility savings. An estimated 500 million gallons of fresh water will be saved in 2013 alone thanks to the over 150 PBWs operating worldwide. Milnor's PulseFlow Technology (patent-applied for) was verified by a third-party and awarded a Certificate of Innovation over four years ago.

Despite all of PulseFlow's successes, Tim King, a true laundry veteran, was never a fan of tunnels. King's 43-year career included posts at four commercial (healthcare, uniform, and hospitality) laundries, none of which employed tunnel washers. He said, “I never wanted a tunnel because they weren't able to get whites white. There is no agitation.” In 2003, at the age of 50, Tim King retired from the laundry industry without ever experiencing the benefits of running a tunnel laundry.

That is, until Tim King received a call from his friend Rich McKevitt of Steiner-Atlantic Corporation two weeks after he retired from the industry!

ImageFIRST, Clearwater began operations in one unit of a ten-unit office park in December 1999. Since then, the laundry has been processing linen from area out-patient, ambulatory, diagnostic, endoscopy, imaging centers, hospices, and surgery centers. They own the various healthcare linen, including 18 different styles of hospital gowns. The laundry also processes doctor coats, employee scrubs, bed linen, operating towels, and bath towels. Their 2,000 ft2 laundry has now grown to encompass all ten units in their office park at a total of 40,000 ft2. The weekly sales have gone from zero to nearly $160,000.00.

As business grew, so did the demand on the aging equipment—two 450 lb. open-pocket washers. Tim King understood that the production would benefit from a tunnel washer, but was unsure of the quality.

Once again, Rich McKevitt reached out to Tim to introduce him to the growing PulseFlow. They flew to New Orleans to tour the Milnor factory with Regional Sales Manager Sam Kielman and President Jim Pellerin, followed by a visit to one of the first PulseFlow laundries, which processes healthcare linen.

He confessed, “I saw first hand how white the linen came out. The PulseFlow is what changed my mind about tunnel washing. By having a top-transfer tunnel, it gives you the lift-and-drop effect (as in a washer-extractor), which is not available in a bottom-transfer tunnel.”

When it was time for the installation, Tim King relied on Rich McKevitt again. Even though this was the first major install for McKevitt, King knew that he could see the project through seamlessly. McKevitt was responsible for every person involved in the installation—from plumbers and contractors, to every manufacturer rep (Milnor, Chicago, and Speed Check).

Tim described the installation, “We never missed a heartbeat of production.” He bragged, “To be able to do an install without having to shut me down kept me from outsourcing my linen, which would have been a huge expense.” King added, “Steiner-Atlantic's Ralph Munson did an amazing job of insuring the safety and professionalism, too. I can't say enough about how our environment was during the installation. It went flawlessly.”

Since starting up the tunnel in December 2012, the laundry's water bill has cut in half! This water savings is quite impressive considering the laundry still employs the two open pocket washer-extractors. Their PulseFlow tunnel is consistently consuming a mere 0.4 gal/lb. and has allowed the laundry to go from a 17.5 hour day to a 7 hour day—reducing an entire shift! The laundry also uses Milnor's Mildata® software to monitor, record, and analyze production data.

As you can imagine, Tim King and the partners (President/Owner Tim Ryan, CEO/Partner J.C. Ryan, and Sales Manager/Partner Sharon Pulnik) are elated with their decision to purchase a Milnor PulseFlow tunnel. King is also excited to introduce PulseFlow Technology to other ImageFIRST franchisees next month during their biannual profit enhancement meeting. In fact, they requested the next meeting be held in Clearwater, so the group may better understand the revolutionary tunnel washing concept and potentially implement in their own laundries.

Tim King and his ImageFIRST Clearwater partners hope to grow their business even more, so they may purchase another PBW™ tunnel. They already know where it will go—in the building across the street (they've already leased all 10 units in their complex)!

King proclaimed, “I am an extreme stickler for quality. I demand it from my vendors and employees, so I may give the best quality linen to our customers for their patient care. PulseFlow has enabled me to offer the very best to our customers, while allowing us to reduce our work day to only one shift and cut our water bill in half.” 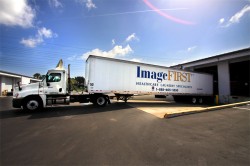 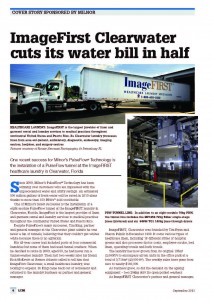 ImageFIRST Clearwater cuts its water bill in half