Pellerin Milnor Corporation has announced the retirement of Laundry Systems Marketing Director Dick Albers. Dick first became involved in the laundry industry in 1961, just one year after graduating first in his mechanical engineering class at Vanderbilt University. He started out as a washer engineer for GE, then joined FMC Corporation, where he participated in the first successful North American batch washer installation. He later joined Milnor in 1985 as a proud father of three and Honors MBA graduate of Harvard Business School.

During his thirty-year career with Milnor, Dick also served as the Product Sales Specialist for Batch Washers and even as a Regional Sales Manager when necessary. He has traveled the world to meet with dealers and customers, participate in installations, and offer his expertise wherever needed. However, he treasures most the relationships he has built over the years, where his colleagues have become family, and will remember Milnor as the place "where you want to do your job - not feel you have to do it. And in the end, someone will always offer you a ride home."

"Dick's knowledge of laundries and tunnel washing is truly unmatched in our industry," said Rick Kelly, Pellerin Milnor Vice President of Sales and Marketing. "We are grateful for his dedication and innumerable contributions to our customers and Milnor. We wish Dick and his wife Jane all the best in his well-deserved retirement." 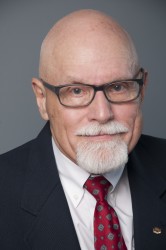