Pellerin Milnor has announced the retirement of Regional Sales Manager John Rasimas. John began his career in the laundry industry after returning from the Vietnam war, where he served active duty in the army as a Captain and Vietnam Huey helicopter pilot. In the fall of 1975, he followed in his father’s footsteps and took over the eastern New York State territory for Statewide Machinery. He attended the very first Clean Show of 1975 to get a taste of the industry and turned his experience into an impressive 41-year career.

After establishing himself in the NYS territory, John then built the foundation of Metroland Industrial Equipment Company (MIECO), a Milnor dealer which formally started with the 1981 Clean Show. In 1991, John was hired by Milnor to serve as a Regional Sales Manager, following the retirement of former RSM Al Bucci. John spent a commendable 25 years managing the northeastern United States coast and eastern half of Canada for Milnor.

John is most looking forward to spending time with his family, including his five grandchildren, playing golf, learning to weld, and travelling upon retiring. However, before he ends his 25 years spent on the road, he will make one last visit as a Regional Sales Manager to Synergy 2016 to personally shake hands and say goodbye to his Milnor and dealer family.

“John is truly a professional and worked tirelessly for our customers and dealers,” said Rick Kelly, Pellerin Milnor Vice President of Sales & Marketing. “We are grateful for his service to Milnor and we wish John and his family all the best in his well-deserved retirement.” 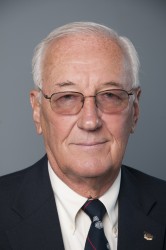