Sue was a graduate of McMain High School and attended Sophie Newcomb College, where she was voted Queen of the Freshman Beauties.  Sue was devoted to her husband and children, and later her grandchildren, who lovingly called her Nana. Sue Rose was known for her wisdom and caring, which was an inspiration to all. Her sweet, ever present smile reflected her endearing sense of humor. She and her husband enjoyed entertaining. She was a gracious hostess. They also enjoyed travelling and visiting interesting destinations on every continent. Their favorite, however, was their vacation residence in Lake of the Ozarks, Missouri. She was a member of Saint Charles Presbyterian Church, and taught Sunday School before her marriage.

Visitation will be held at St. Charles Presbyterian Church (1545 State Street, New Orleans, LA 70015) on Thursday, October 29th at 1pm, followed by the funeral service at 2pm, and then a private interment. 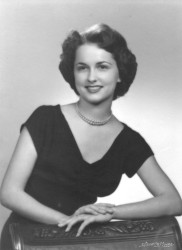