Save water, energy, time, and money

Milnor’s RinSave® water saver feature is standard on all T-Series, V-Series, MWF-Series, X-Series, M-Series and 48040 open-pocket washer-extractors. This exclusive software allows for the basket to reach a precise G-force that “slings” the wash liquor (including water, chemistry, and soil) out of the goods after a wash step. This feature will save up to 2 rinses per load and fill/rinse time. Laundries with the RinSave feature will get more loads per hour to save you money!

You can save up to .4 gallons of water per pound of goods processed. That’s up to two rinse steps and ten minutes saved per load!

When time is money – and water and energy cost, well, money – saving hundreds of gallons of water every day can add up to real savings. Not just for your bottom line, but for the planet as well.

RinSave® water saver can be used with formulas utilizing bleach.

“This short spin removes more chemicals without setting them into the linen, than the standard drain step. We were able to remove 2 rinses from the following formulas Sheets, Pillow Cases, Towels, White Table Linen, Color Table Linen, Rag and Reclaim. It also eliminated the use of Intermediate Extracts in all formulas used at the Hotel laundry. I performed titration tests on the sheet and towel formulas before and after the RinSave feature was added. After the detergent and Bleach baths, the RinSave cut the alkalinity and bleach by 50%; this is why we were able to remove the rinses.” 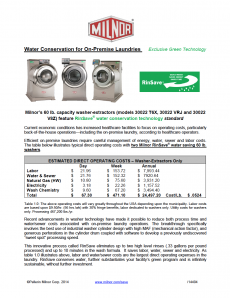 How much can you save? 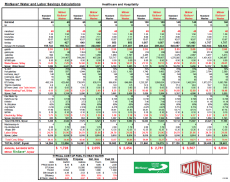 What is RinSave® Water Saver? 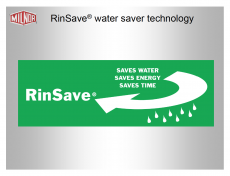