Situated on the waterfront of Chesapeake Bay, Norfolk, VA is home to Eggleston, a nonprofit agency that provides work opportunities for individuals with disabilities. Eggleston has successfully achieved their mission of "Creating Education, Training, and Employment Opportunities," since its founding in 1955 by setting up a variety of businesses designed to create "a community which values the abilities of all persons and endeavors to improve the quality of life at work, at home, and at play."

One of the many businesses contracted with the nonprofit organization is Eggleston Laundry Services, a state-of-the-art industrial laundry capable of processing healthcare, federal and hospitality linen.

Eggleston first entered the commercial laundry business in 1992 after receiving a laundry contract through the National Industries for the Severely Handicapped. This contract began a long and beneficial relationship between the Federal government and Eggleston, so that individuals with disabilities could provide much needed services through commercial laundry operations. Thus, the team purchased and installed a brand new 76032G1 7-module Milnor CBW® system after conducting extensive research on other nonprofit agencies also utilizing a Milnor tunnel system.

In 2001, Eggleston's demand was increasing at a rate that required them to expand their laundry operations to a larger facility in Norfolk. They purchased and reconditioned a 1986 76032G1 8-module Milnor CBW tunnel to run alongside their original tunnel. This addition allowed Eggleston Laundry Services to add four healthcare accounts, multiple Federal housing accounts, dockside services, and training gear customers spanning from Virginia to North Carolina over its last eleven years in operation.

Choosing Milnor equipment for the project was an easy decision for the Eggleston team. "Based on past experiences with other equipment brands, and armed with the knowledge that Pellerin Milnor Corp. engineers manufacture and offer both training and support for their equipment, it was a fairly easy task for us to convince the Eggleston Executive Team and Chief Financial Officer to approve the purchase of our brand new PulseFlow CBW tunnel, single stage press, elevating shuttle, and material handling system," say Boyd and Hopkins.

The challenge, however, came during the design phase, when Hickey and Fleming were tasked with determining the best approach to remove the old tunnel and install the new system while allowing Eggleston to keep their remaining batch washers and dryers up and running. Hickey notes, "We had to consider many factors to ensure both systems and technologies would work seamlessly throughout the installation process and in their daily operations."

Expanding on this, Fleming adds, "With great communication from everyone involved, we were able to achieve the customer's goal of upgrading an aging system while making minimal to zero modifications of existing equipment location or building structure and maintaining full operation of the rest of the laundry."

The installation, completed in September 2019, proves that running older technology alongside newer technology can be a successful practice in the laundry industry. Both current tunnels at Eggleston Laundry Services - their 1992 CBW tunnel and 2019 PulseFlow tunnel - share the same proven components that have made Milnor tunnel washers a market leader for nearly 40 years. This includes Milnor's true top transfer design, which lifts the goods completely out of the wash bath via a perforated scoop and transfers them over the top of a solid partition. The partition allow the baths in each module to be completely separated and prevents wearable seals from being placed under the water line.

Additionally, both tunnels utilize counterflow washing against the flow of the goods, which properly carries the wash liquor back towards the loading end of the machine. True Top Transfer combined with counterflow promotes better and faster dilution with each successive bath in a Milnor tunnel as compared to other equipment.

Incorporating a PulseFlow technology tunnel system in to their usual workday has already helped Eggleston Laundry Services realize a great reduction in wash time of at least 5 hours per day. PulseFlow technology's high velocity counterflow is activated at the end of each transfer cycle and offers faster rinsing in fewer modules. Because counterflow is delayed for approximately 70% of the cycle time, standing baths receive extra chemical activity at full strength. Hopkins notes that, "With the larger loads and efficiencies of the PulseFlow tunnel compared to the 1992 CBW, it takes significantly less time to get the product onto the production floor." Further, Hickey adds, "The new PulseFlow tunnel is exceeding the production rate offered during the design portion of the project. Just as important are the water savings now being realized from the new system."

Eggleston, TLC Tristate, and Milnor's continued mutual support for each other has proven to be a successful partnership over the years. Boyd and Hopkins are enthusiastic advocates for growing and expanding with Milnor equipment, highlighting the importance of having a training and support system readily available. Meanwhile, Hickey is an equal advocate for Eggleston, stating, "Visiting Eggleston is the highlight of my day, as the employees are a true joy to be around. Eggleston Services is more than just a laundry. They give hope and a good job to the members of our society who need it most." 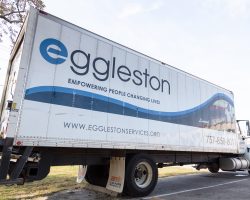