Cathy and Keith Galloway, owners of LA Commercial Laundry, began processing linen for the South Louisiana Casino market in 1998.  In 2002 they made the decision to expand their laundry operations and relocated their laundry to Scott, LA a city just outside of Lafayette.  They knew that they needed to automate their operations and chose to purchase a Milnor G3 CBW System.  They also utilized the services of their Milnor dealer, Pellerin Laundry Machinery Sales Company, to design their new laundry facility, supply all of their mechanical room equipment and provide Chicago Dryer equipment to satisfy their flatwork and full-dry needs.  The Galloways chose Pellerin Milnor because of their ability to provide prompt service and support.

Keith Galloway said, “We looked at all of the foreign competitors and it came down to the fact that we felt that no one could provide the level of service and support that Pellerin could.  Simply put – they are open, when we are open." He continued, “Even Curtis Pellerin has driven a part to my plant when we were in an emergency situation.  Pellerin’s customer service mirrors our goal of exceeding our customer’s expectations with prompt and consistent support.”

Since 2002, LA Commercial has steadily expanded their operations and continually grew their customer base across the entire state.  In 2014, Keith and Cathy Galloway made the decision to build a 2nd laundry in the Shreveport area.  They were originally planning to utilize 450 lb. open pocket washers to process their hotel and restaurant linen.  But with the ever-rising cost of water/sewer in the Shreveport area, they decided to purchase a Milnor PulseFlow® CBW® tunnel system.  “We continually look for ways to process our linen while being environmentally friendly.  The Milnor PulseFlow allows us to be the GREENEST hospitality laundry facility in the Shreveport area,” says Cathy Galloway.  LA Commercial once again utilized Pellerin’s services to design their laundry facility with expansion in mind.

Their Shreveport facility began processing linen in November, 2014.  The Galloways purchased a Milnor 6 Module 76039 150 lb. PBW™ with 4 Compartment Loading/Weighing Conveyor and Milnor 40 Bar Single Stage Press.  The pressed cakes are automatically loaded onto carts with gravity rollers.  The cake cart is then pushed over to one of the seven Milnor MLG-202 200 lb. gas dryers.

Pellerin’s Vice President of Sales, Scott McClure stated – “we designed the Galloway’s Shreveport facility to minimize their operating cost while conserving their initial budget.  This setup allows the customer to benefit from the labor and utility saving features of a Milnor tunnel system without having to invest in all of the automation upfront.”  As LA Commercial’s Shreveport business grows, their plans are to expand their Milnor PBW™ from 6 modules to 9 modules and add a 2-tier cake shuttle and (4) Milnor System Dryers.

LA Commercial originally planned to utilize large open pockets as back-up and to process heavy soiled bar rags and table linen.  It made more sense for them to utilize (6) Milnor 160 lb. open pocket washers.  This allows the plant to sort all of their linen to 150 lb. batches and enables them to use the same dryers to process linen from the open pocket washers and PBW™ tunnel.  The facility is also equipped with various Chicago flatwork and full-dry processing equipment, and mechanical room equipment which includes equipment from TEA, Fulton and Ingersoll-Rand.

“I was originally skeptical that we could process our hotel and restaurant linen in less than 0.5 gallons of water per lb. But the Milnor PulseFlow System made me a believer. We are processing all of our room linen and white food and beverage linen in our Milnor PulseFlow while averaging just under 0.5 gallons per lb. And the quality is impeccable,” claims Keith Galloway.

The facility currently operates a single shift operation and processes approximately 15,000 lbs. of linen per day utilizing 15 FTE’s.  This translates to an impressive daily average of 125 pounds per operator hour (PPOH).

“I would highly recommend Milnor’s PulseFlow tunnel washer to anyone.  Our semi-automated setup affords us the water and utility saving benefits without all of the capital expense of a fully-automated system.  The Milnor PBW™ provides the unique capability of being able to expand for future growth.  This also kept down our initial investment cost,” says Keith Galloway.

The Galloways look forward to continued growth in the Louisiana market and plan to utilize additional Pellerin Milnor equipment for their future needs.

For more information about how PulseFlow® Technology can increase your production, please visit www.milnor.com/pulseflow_technology or call 504-712-7656. 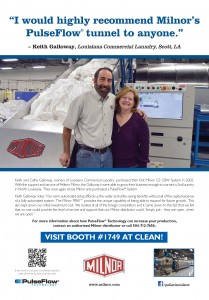